About 8 years ago, ProTrain Perfect 2 released as a German train simulator based on Trainz 2009. Even though production of new content for the game ceased in 2014 already, it still remained fairly popular for some time after and still holds the second biggest compound German train network in any simulator after Microsoft Train Simulator.

Unfortunately, the game became increasingly hard to come by after the closure of the Vizzart-Webshop and a slow but steady raise in prices on the remaining boxed versions. For everyone who's feeling a bit nostalgic and who wants to still get PTP2, the 3DZug webshop now offers the "Deutschlandbox"-pack. This contains the full game as well as a few route add-ons, making it possible to drive from Hamburg to Munich via Berlin, Leipzig, Jena, Sonneberg and Nürnberg. Please note that the game is in German only and does not really support being played in English. 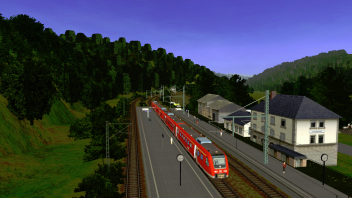