This is temporary route upload because of broken road network assets on the DLS. 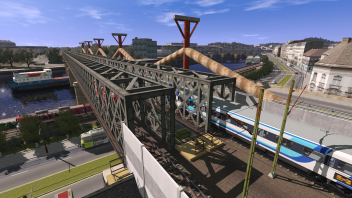 This is temporary route upload because of broken road network assets on the DLS. These broken assets prevent the upload of the route to the DLS. N3V is looking into the problem.

This update also extends the Slovak main line to the city of Žilina. The Czech main line now extends to Brno, which is still work in progress.

Please note that this route is still in development and in the process of fixing with TRS19 standarts. So some of the areas may be incomplete or look bad.

This route is a mix of work of 5 people:

This is a fictional model of several Central Europe countries, but real data is used in some ways.

If you have any ideas or problems, contact me on the trainz.de forums or email: rikinob.rb@gmail.com

This route has no 3rd party kuids (except the broken roads for now). If you have unknown dependencies, please ensure that you have downloaded all the DLS kuids and try to install all default TRS19 route packs (Sebino Lake, ECML Edinburgh-Dundee, Canadian Rocky Mountains Golden BC, Kickstarter County 2, Niddertalbahn TRS19, Cornish Mainline and Branches TRS19). Again, this route doesn't use any payware or 3rd party kuids, all assets are either from DLS or from freeware N3V route packs.

THIS WILL NOT OVER-WRITE v0.96 AND SESSIONS FROM v0.96 WILL NOT BE AUTOMATICALLY MOVED TO THIS VERSION!

If any other edits of this routes are released on 3rd party websites, RichardBosnak and Yuz6099 take all credits for original route and will upload the edit to the DLS if deemed appropriate. If edit is released on the DLS, you have to credit RichardBosnak or Yuz6099 in description.

If you do not comply, we will pursue legal action if necessary.

All base game routes: